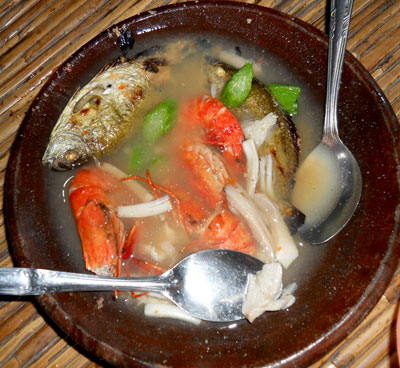 One of the best things to do in Sumbawa Regency is to enjoy the culinary. The only problem is the insufficient information regarding food options. Well, tourists can find many types of foods when exploring Sumbawa, after all. The most common one is made of fishes especially Singang! As for the non-fish-based foods, tourists may find several delicious foods like Gecok, Manjareal, Bubur Palopo, and much more! Each of them has a distinct taste and texture, as well. No wonder, all tourists are likely to try them all when visiting Sumbawa Regency later.

Where to Get Them
Before talking more about Sumbawa’s traditional foods, tourists need to know how to get them first. When it comes to simplicity, tourists can order the foods directly from the hotel where they are staying at. It is indeed efficient, but the price is considered expensive. As an alternative, tourists must explore some parts of the downtown to find local eateries. The first benefit is the cheaper price. Another benefit is related to the nuance. They have the chance to eat together with the villagers and talk to them in a friendly manner.

More about Traditional Foods of Sumbawa Regency
Many options of traditional foods are available in Sumbawa Regency. Tourists only need to find the right place to get them, in this case. The first option is called Singang, which is made of fresh local fish. Mostly, the locals use either snappers or milkfish when cooking. The taste would definitely savory! Not to mention it involves spicy flavoring! No one would refuse to eat Singang twice, no? As for the extra, tourists can eat it with rice, sago, etc.

The next recommended food to try when visiting Sumbawa Regency is called Sepat. This one also uses local fishes as the main ingredient. The local may grill the fish and pour delicious sauce on it. They also put several complements like sliced cucumbers and tomatoes. It emits a fresh taste, therefore. Next, there is Gecok! This one uses beef instead of fishes, though. After frying, the locals stir the meat along with other ingredients. The taste is both fresh and sour!

What is more? Sumbawa Regency is also known for its Bubur Palopo or buffalo porridge. Instead of using coconut milk, this one uses fresh buffalo milk! It also involves brown sugar and other unique ingredients. As for the taste, it is both sweet and savory. Well, more traditional foods are available to try in Sumbawa later. Tourists should carry extra cash to try them all, therefore!

How to Get There
In order to try all those foods, tourists need to visit Sumbawa Regency right away. If they come from Jakarta City, it is recommended to take an airplane to get to the destination faster. For the information, the flight may take around 4 hours and 5 minutes to Sultan Muhammad Kaharuddin Airport. After reaching the destination, they can simply visit some recommended local eateries and order some great foods cheaply. In order to find the right place, they can ask a local guide or nearby villagers, actually.