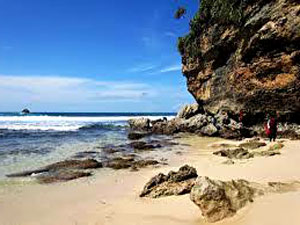 It is likely tourists won’t run out of vacation destinations when exploring Sumbawa Regency. Goa Beach is an example. This stunning coast is located in Karang Dima Village and belongs to Labuhan Badas Sub-District. The beach is known for its beauty, indeed. However, people are also interested to visit it due to the history. Not to mention tourists have the chance to explore a nearby cave later. This explains why the locals gave the name “Goa” to the site, which means a cave. Another reason why people often come to the beach is the chance to enjoy a family recreation.

The Nuance
The first impression once arriving at Goa Beach is the big coral reefs and cliff that reside on the sides of the shoreline. They look great and often become an object of photography, as well. The next recognizable feature is the big waves! Knowing this fact, tourists should not get in the water carelessly. Even swimming is not allowed due to those strong waves. As an alternative, tourists can enjoy beach walking and explore the shoreline comfortably. Thanks to the soft-textured sand. Is that all?

Exploring Goa Beach
Goa Beach is known among tourists due to many reasons. For instance, it is related to the landscape. Thanks to the presence of majestic cliff and coral reefs. Aside from sightseeing, visitors are likely to conduct photography on the site. They get around the shoreline in order to find the best objects to capture as well. Some of them definitely take selfies in front of those coral reefs. Later, they may post the photos on their social media accounts as well.

The next allure that tourists can find in Goa Beach is none other than the cave. It becomes the prime feature in that area, after all. The good thing is tourists are allowed to explore the cave and take photos of it during the visit. There is no special story related to it, though. As an alternative, they should reach the nearby pier where they can enjoy fishing and sightseeing! Still, it is important to carry a fishing rod and other equipment by themselves.

What is more? Goa Beach is known for its seafood eateries, which are located near to the shoreline. That means tourists can enjoy grilled fishes while watching sea scenery! Have no worries. The price is considered cheap, so everyone can afford those foods without problems. Still, it is better to come with families or friends in order to enjoy eating together in a merrier manner.

How to Get There
From Jakarta City, tourists can simply head to Sumbawa Regency by airplane. That means they should depart from Soekarno – Hatta International Airport and head to Sultan Muhammad Kaharuddin Airport, which may take around 4 hours and 5 minutes. Once arriving at Sumbawa Besar, the next destination is Karang Dima Village at Labuhan Badas Sub-District. The distance is only 5.9 km, so the trip takes around 10 minutes or less. As for the best route, it is Garuda Street.