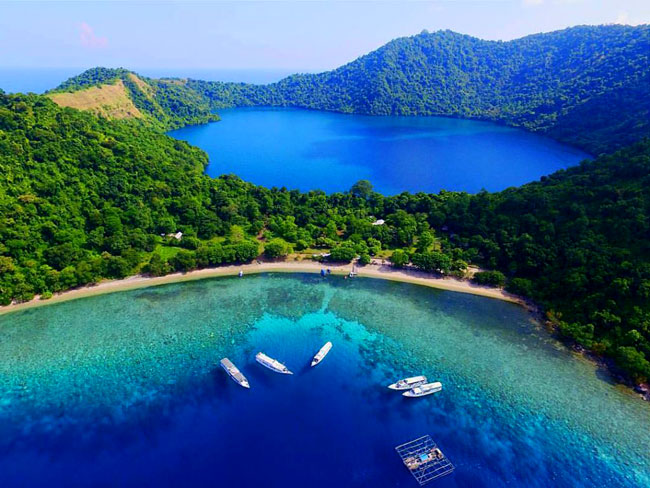 Sumbawa Regency has several recommended islands to explore including the one called Satonda. Some people also call it Satonde, which belongs to Nangamiro Village at Pekat Sub-District. Also, it resides on the border between Sumbawa and Dompu Regency. Not only the island offers majestic panoramas, but it also has an interesting history that tourists can learn during the visit. It is said the island was formed due to an explosion of underwater volcano back then. As for the name, it derives from the presence of Satonda Mountain in that area. No wonder, most people come to the island for sightseeing and photography.

The Nuance
Satonda is one of the best islands in Sumbawa Regency. Thanks to the peaceful nuance and beautiful scenery. The best spot perhaps is at the shore, featuring a white sandy shoreline and several types of trees. The seawater is clear and calm, which is suitable for swimming and snorkeling. The island is also known for its famous corals like Nephtea and Labophyton, actually. Do not ignore the fact that the island features the beautiful Satonda Lake and Satonda Mountain!

Exploring Satonda Island
The most interesting allure in Satonda Island is none other than the beauty of the shoreline. This explains why most tourists spend their time on the shore and enjoy several tourist activities like swimming, beach walking, and even snorkeling. These people also visit the nearby pier and conduct photography in that spot. Is that all? Aside from the shoreline, the island offers other attractions for sure. This includes the famous Satonda Lake!

The location of the lake is near to the shore, which is 3 km apart. The unique thing is the lake features salty water instead of freshwater! According to the locals, it gets the salty taste from a big tsunami that happened back then. In order to get rid of tiredness during the exploration, tourists can take advantage of the available cottages! Tourists can even find toilets there! Thus, it is said Satonda Island is better than the others due to the facility. For those who want to enjoy snorkeling, though, they must prepare the equipment beforehand.

Another allure in Satonda Island is the local myth related to the famous hanging stone. The ancestors hang those stones on the branches of the trees that reside near to the lake. No one knows the purpose, though. Knowing this unique phenomenon, tourists also follow along. Somehow, they believe it as a miracle giver. Some people even pray after hanging a stone on the branch!

How to Get There
From Jakarta City, tourists should head to Sumbawa Regency first. They can take an airplane at Soekarno – Hatta International Airport and head to Sultan Muhammad Kaharudding III Airport directly. This flight takes approximately 4 hours and 5 minutes. Next, after arriving at Sumbawa Besar City, their next destination is Nagamiro Village where they can get a boat service. Lastly, it takes about 1 hour to reach Satonda Island by boat.