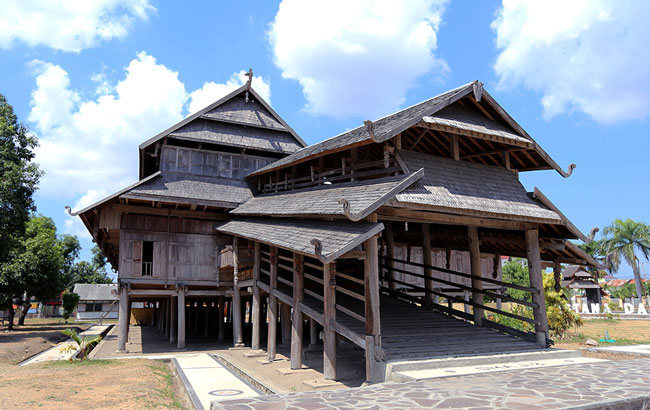 Most tourists recognize Sumbawa Regency for its natural attractions indeed. However, the region also has other interesting allures, especially related to the history. Here is the reference. The name is Istana Tua Dalam Loka, which is located in Seketeng Village. The location is in the downtown, so everyone is able to get there easily. Moreover, the building offers both an attractive appearance and historical value. This explains why visitors are likely to conduct photography and learn some information related to the building once they reach the site. It helps them to learn a local history, somehow.

The Nuance
In terms of name, Istana Tua Dalam Loka means The Old Palace of Dalam Loka. It has the shape of “Rumah Panggung” (Minahasa’s traditional house), which looks both unique and alluring. No wonder, most visitors are likely to take photos of the building when exploring the site. The prime material is definitely woods. The design represents the Islam’s philosophy, as well. The building has 99 pillars, which resemble Asma’ul Husna or Allah’s traits. According to the locals, the building was built using the Baji system and it even can withstand earthquake due to the pliability.

Exploring Istana Tua Dalam Loka
The question is what tourists may do in Istana Tua Dalam Loka. It can be as simple as appreciating the construction and architecture. They are allowed to explore the site freely, after all. Aside from sightseeing, it is also recommended to take photos of the palace during the visit. The design and shape are good enough for photography! Some people even posted the photos on their social media accounts back then. This helps to increase the site’s popularity, somehow.

What is next? Many people come to Istana Tua Dalam Loka to learn the history, as well. The fact is the building has been there for more than hundreds of years. No wonder, it has become one of the most significant cultural heritage sites in Sumbawa Regency. According to the locals, the site was built during the reign of Sumbawa Sultanate. To be exact, the construction began in 1885 and finished in 1888. It was built by Sultan Muhammad Jalaluddin Syah III.

Those who visit Istana Dalam Loka can also gather further information related to the building. For instance, it is related to the function. In the past, it became the house of the king. In 1932, though, the function changed and it has become a new vacation spot in Sumbawa Regency these days. It attracts more tourists over time, both locals and outsiders.

How to Get There
From Jakarta City (Soekarno – Hatta International Airport), a flight to Sumbawa Regency (Sultan Muhammad Kaharuddin III) may take around 4 hours and 5 minutes. Once they arrive at Sumbawa Besar City, their next destination is none other than Istana Tua Dalam Loka. The distance is 2.6 km, so the trip may take only 6 or 10 minutes depending on the traffic. It can even be faster if tourists take Diponegoro Street.