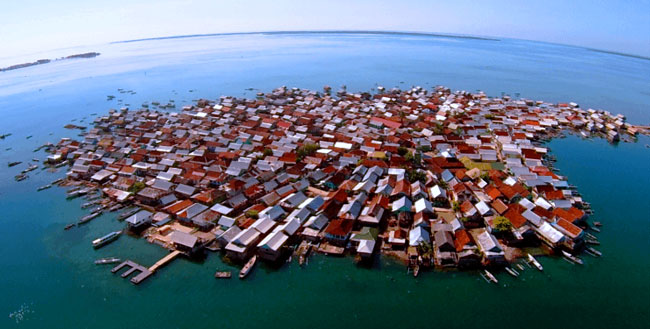 Not all tourists know the fact that Sumbawa Regency also has an amazing archipelago. The location is in the north part of it! As for the reference, there is Bungin Island. This one belongs to Alas Sub-District and becomes the most crowded island, as compared to others. Bungin is suitable for tourists who want to meet Bajo Tribe with its daily routines. However, it doesn’t suit those who look for a peaceful vacation due to the high population density. Despite the fact, the island may satisfy those with a photography hobby!

The Nuance
The nuance is definitely crowded and a little bit uncomfortable for some tourists. For the information, Bungin Island has some ports, but no shorelines. No green landscapes are seen on the island too. That means tourists won’t find trees or bushes there. On the other hand, it features an interesting atmosphere due to the fishermen activities. Many local boats are also seen there! This active ambiance provides tons of great objects to capture while enjoying photography, therefore. Another good feature is the island comes with a sturdy bridge that connects to Sumbawa Regency. That means tourists can either take a land or sea transportation service in order to reach the island!

Exploring Bungin Island
Bungin is a small secluded island, located in the Bali Sea. It is true tourists need to spend much time to get there (as the distance is 70 km apart from Sumbawa Besar). The good thing is the island provides a distinct vacation experience to visitors. The fact is Bungin is considered the most crowded island in the world! Even tourists won’t find empty land there. For the information, it is inhabited by Bajo Tribe of South Sulawesi Province.

The best feature in Bungin Island is none other than the inhabitants. That means tourists are able to interact and meet the locals comfortably. After all, those people are friendly and often help visitors regarding basic needs like foods and accommodations. As for tourist activities, the best thing to do is to conduct photography. Tourists can simply take photos of villagers’ daily routines or visit the port for more great objects to capture.

What is more? While exploring Bungin Island, tourists have the chance to learn the history of it as well. It is said the first Bajo person who came to the island was Palema Mayu. It was before the big eruption of Tambora Mountain in 1812. At the time, the island featured a white sandy shoreline and lots of mangroves. However, due to the rapid population growth, the island becomes more crowded over time.

How to Get There
Tourists’ first destination is indeed Sumbawa Besar City. If they come from Jakarta City, the best way to get there is by airplane. From Soekarno – Hatta International Airport, a flight to Sultan Muhammad Kaharuddin III Airport takes around 4 hours and 5 minutes. Later, after arriving at Sumbawa Besar, they can directly head to Bungin Island by taking Lintas Sumbawa Street. The distance is 78.8 km, so the trip takes approximately 1 hour and 54 minutes.