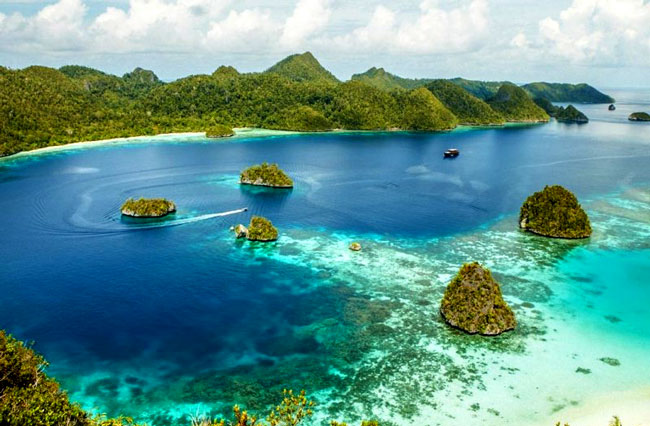 Sumbawa Regency has several beautiful islands located on the north part of the region. One of them is called Moyo or Mojo Island. In terms of territory, it belongs to Labuhan Badas Sub-District, actually. It resides in Saleh Cape and has the stunning natural preserve too! No wonder, tourists won’t refuse to come to the island someday. They would take advantage of the beauty to enjoy sightseeing, photography, diving, and many other fun activities! Due to the popularity, in fact, some famous people once visited the island. These include Maria Sharapova, Kim Te Hee, Princess Diana, etc.

The Nuance
The first impression once arriving at Moyo Island is definitely the serenity. As compared to other small islands in Sumbawa Regency, though, Moyo is better when it comes to facilities. It is because tourists are able to find several resorts and homestays there. The size of the island is around 350 km per square and it is surrounded by lush green trees. No wonder, the nuance feels both refreshing and comfortable. It also features several beaches and other natural attractions like waterfalls. Not to mention it has some good spots for snorkeling and diving!

Exploring Moyo Island
Even though tourists need to spend much time to get to Moyo Island, their effort won’t go to waste. Once they approach the island, the beautiful scenery welcomes them. The sea is quite clear and tons of fishes can be seen clearly from the boat. Sometimes, in fact, several exotic dolphins occur on the shore. The best feature in Moyo Island is indeed the beautiful white sandy shoreline where tourists can enjoy relaxation and beach walking!

Those who visit Moyo Island should not miss the chance to explore the island, too. During exploration, moreover, they may meet the stunning Matajitu Waterfall. Do not forget to collect photos of it, later! Tourists even have the chance to take a bath in natural ponds comfortably. They must prepare extra clothes beforehand, though. After visiting the waterfall, the next thing to do is to relax in the midst of lush trees. The nuance helps visitors to get rid of stresses, in fact.

As for the tip, tourists should spend the night in Moyo Island. It is because the boat service is only available early in the morning. Have no worries. Unlike others, Moyo Island has several bungalows and inns for tourists to rent during the visit. The price becomes more expensive during holidays, though. That means everyone should prepare extra cash if they are visiting the island aside from regular days.

How to Get There
From Jakarta City, tourists can simply take an airplane and head to Sumbawa Regency. A flight from Soekarno – Hatta International Airport to Sultan Muhammad Kaharuddin III Airport would take around 4 hours and 5 minutes, actually. Once arriving at Sumbawa Besar City, tourists’ next destination is Badas Port where they can get a boat service. The last destination is indeed Labuhan Aji Port at Moyo Island.