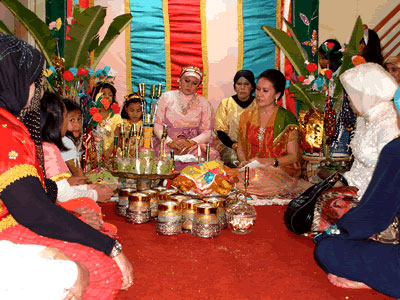 Many interesting ceremonies await tourists in Sumbawa Regency. This explains why the region becomes more popular over time. For those who look for a reference, there is Nyorong Ceremony. Even though it is considered unofficial, the ceremony has become the part of Sumbawa’s tourist attractions these days. This is why more outsiders are interested to watch and learn it when visiting Sumbawa during holidays. So, what is Nyorong actually? It is a delivery process of marriage’s dowries from the groom’s to the bride’s house. The parade looks beautiful, for sure!

The Nuance
The nuance feels merry and beautiful, due to the presence of parade procession. The groom’s female relatives may carry the dowries on their head and walk solemnly to the bride’s house. The items vary, though, including clothes, cakes, staple foods, etc. However, only small items are carried on the head of those women. Aside from the parade, another allure is performed, which is called Ratib Rebana Ode. What about the clothes? They wear colorful traditional attires and modest ornaments. During the parade, tourists have the chance to walk along with those people in a distance. Even taking photos are allowed!

Exploring Nyorong Ceremony
The good thing is tourists are allowed to join Nyorong Ceremony without hassles, as long as they get the permission from the locals first. Along the way during the parade (heading to the bride’s house), a unique performance occurs. As mentioned before, the name is Ratib Rebana Ode. It makes the parade more interesting and merrier, for sure. Once arriving at the destination, a special ritual welcomes them. The name is Rabalas Lawas. It makes the nuance feels friendlier! The next procession is none other than the giving of dowries. At the time, tourists should get the permission first before taking photos, though.

Aside from joining the parade, tourists can also learn further information regarding Nyorong Ceremony. They can get the information from either villagers or a local guide later. It is said the original name is Sorong Serang and it belongs to Sasak Tribe. According to the locals, the best location to witness the ceremony is at Alas Sub-District. Thus, tourists only need to visit the location if they want to watch it directly.

What is more? Nyorong Ceremony doesn’t happen every day. That means tourists must find out the exact schedule first before visiting Sumbawa Regency for watching the ceremony. As an alternative, they should talk to the local service regarding the information. It is also recommended to get the info from a tour agency, but it costs some money.

How to Get There
A flight from Soekarno – Hatta International Airport (Jakarta City) to Sultan Muhammad Kaharuddin III Airport may take around 4 – 5 hours. It can be faster during a good weather, though. Later, after arriving at Sumbawa Besar City, their next destination is a nearby village where the ceremony is done. In order to avoid disappointment, though, they must hire a local guide or tour agency first. The purpose is to find the right time and place to watch the ceremony.