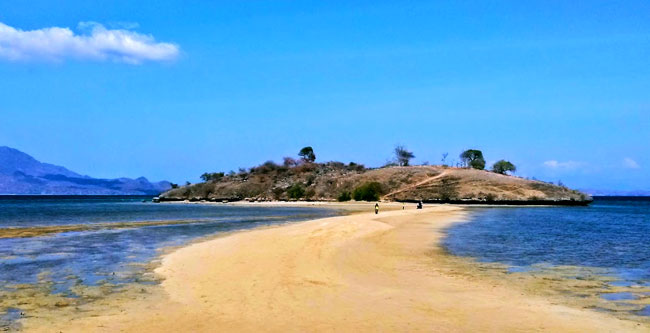 Lariti Beach should be tourists’ next vacation destination after spending some time in Sumbawa Regency. This beautiful beach is located in a neighboring region, though, which is at Bima Regency. The exact location is in Soro Village at Sape Sub-District. Both the panorama and nuance are quite satisfying, so more tourists would visit it either on regular days or holidays. It also offers a unique natural phenomenon called “Laut Terbelah” (the parted sea). Not to mention it is the home on Panihi! What is it? Here is further information about the island.

The Nuance
The white sandy shoreline and calm beautiful sea are common features that tourists may find in Lariti Beach. However, the beach has a special allure that people won’t find in other places. It is none other than the parted sea like that of Moses’s story. During the low tide, a path appears and connects the shoreline to a small island located across the sea. No wonder, tourists are able to reach the island at the time. Another impressive feature is the presence of lush mangroves where tons of “Panihi” live. It is the local name for bats!

Exploring Lariti Beach
The best feature in Lariti Beach is the parted sea. In order to witness this phenomenon, though, tourists should visit the beach during the low tide. At the time, they can do several things like photography. Moreover, they can pass through the parted sea and get to the nearby island comfortably! The island is small, but it is perfect enough for a short hiking and sightseeing. The moment before the end of the low tide gives tourists the chance to play water in that area too! However, they must get out right before the high tide (especially for kids).

The next attractive feature in Lariti Beach is the presence of a lush mangrove forest, which is located near to the shore. As mentioned before, this place becomes the home of bats or Panihi. Tourists can even take photos of flying bats that get out of the forest to look for foods. The best moment is in the afternoon, though. It is because those bats are sleeping in the mangrove forest both in the morning and at noon.

During the visit, tourists may hear a legend from the locals too. It is said Sultan Bima and his followers often appear in Lariti Beach riding his horse. The locals believe that the spirits wander and protect that area over time. Not all people believe in it, though. Well, regardless of the purpose to visit Lariti, everyone should not cause harm or litter in that area. Carrying or eating foods and drinks are allowed, but tourists should take care of the trash later!

How to Get There
A flight from Soekarno – Hatta International Airport in Jakarta City to Sultan Muhammad Kaharuddin III Airport in Sumbawa Regencymay take around 4 hours and 5 minutes. Once tourists arrive at Sumbawa Besar City, they can directly head to Lariti Beach by taking Diponegoro Street. The distance is 299 km, so the trip may take approximately 6 hours and 55 minutes.