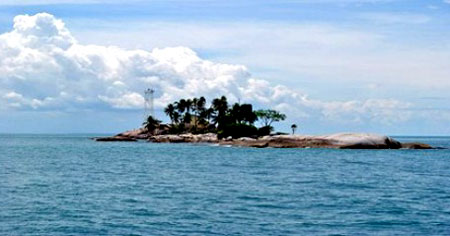 Sumbawa Regency features a beautiful archipelago where many small islands reside, including the one called Lampu Island. Actually, it resides near to the border between Sumbawa and East Lombok Regency. The exact location is in Labuhan Pandan Village at Sambelia Sub-District. Many people also call it Gili Lampu. In terms of name, “Lampu” means lighting. The locals gave the name due to the presence of a lighthouse that becomes the prime feature of the island. Not only it functions to direct harboring ships, but the lighthouse also becomes a tourist attraction there. What is more about the island?

The Nuance
In terms of nuance, Gili Lampu is considered peaceful and soothing. Only a few people are seen on the island, so tourists can enjoy relaxation comfortably. The best spot to visit is none other than the shoreline, where stunning white sand and clear blue sea await. Some cottages and trees are seen on the shoreline too. As mentioned before, the island features a lighthouse where tourists can visit later. The next impressive feature is the mangroves that grow scarcely on the shoreline. Here is the tip. For the best nuance, tourists should visit the island at night when the lighthouse emits the light! It looks so beautiful!

Exploring Lampu Island
In terms of region, Lampu Island belongs to Sambalia Sub-District. Tourists only need to get to the left part of Transad Village and ride a boat to get to the destination. This easy accessibility has become one of the best allures of the island, indeed. What are the others? Tourists are also interested in visiting Lampu Island in order to see the stunning landscape directly. The formation of coral reefs and mangrove trees look so astonishing, for sure!

The next reason why Lampu Island is known among passionate travelers is related to the location. It is located near to other small islands like Gili Lebur and Petangan. Thus, tourists can conduct island hopping easily later. What is more? As mentioned before, the island has a significant feature (which is the lighthouse). The good news is tourists are allowed to get into the lighthouse and climb it freely. From the top of it, the panoramas look more breathtaking for sure.

Another allure in Lampu Island is related to the history. Several decades ago, many local fishermen often dropped by for resting during their fishing. As the time went by, the island became more popular among tourists. No wonder, it is included in one of the most recommended vacation spots to visit in Sumbawa Regency.

How to Get There
Those who come from Jakarta City, they may spend about 4 hours and 5 minutes to reach Sumbawa Regency by airplane. Their starting point is Soekarno – Hatta International Airport and the destination is Sultan Muhammad Kaharuddin III Airport. Once reaching Sumbawa Besar City, their next destination is definitely Lampu Island. It involves a boat service to get there, so tourists should have prepared the money beforehand.