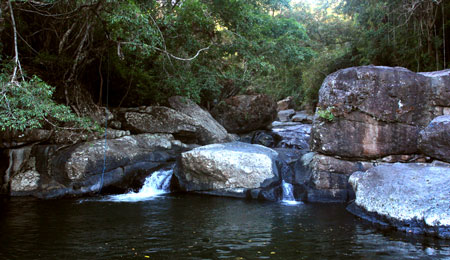 Sekongkang Waterfall is one of Sumbawa Regency’s best tourist allures. As the name suggests, the waterfall is located in Sekongkang Sub-District. The exact location is in Kemuning Village, actually. The pristine ambiance and beautiful landscape make the waterfall popular over time. Visitors usually enjoy sightseeing and photography on the site. Also, some of them want to conduct an exploration or small trekking during the visit. The best thing is the waterfall is located near to an active mining site and a soothing fountain. Thus, visitors can see many interesting natural attractions there!

The Nuance
The first impression once arriving at the site is the serenity. It is because the waterfall resides in the midst of a forest, surrounded by big trees and lush bushes. One thing, the size is considered small and the water discharge is weak as well. Tourists can even climb on the rocks that flank the waterfall easily. Once get on those rocks, they can also jump to the natural pond below them. It feels fun and refreshing! According to the locals, the waterfall doesn’t lose the water regardless of the season. That means it lasts throughout the year! The locals even contain the water to fulfill their necessities.

Exploring Sekongkang Waterfall
Well, people have a different reason to visit Sekongkang Waterfall. The most common reason is to enjoy trekking or exploration. The thing is first-timers are likely to get confused when heading the location due to the absence of road signs. Have no worries. Tourists can simply ask the locals regarding the location. For the information, villagers often call it Perpas Waterfall as well. Thus, tourists should be familiar with this alternative name when asking for the information later.

As mentioned before, trekking becomes the best thing to do in Sekongkang Waterfall. It can be done either along the way to the waterfall or after arriving at the site. While trekking, tourists may see various stunning floras on both sides of the route. They are likely to meet exotic animals during the activity! These include cicadas and centipedes! Thus, do not forget to carry a camera when visiting the waterfall later. Nature, flora, and fauna, become a great object for photography, no?

After crossing a river, tourists may reach the first checkpoint for trekking. They may pass through a forest in order to reach the waterfall, as well. After arriving at the location, a beautiful waterfall welcomes everyone. It looks serene and beautiful with its small size. The water discharge is safe for bathing and playing water, too. Even kids are able to enjoy swimming in the natural pond, located below the waterfall.

How to Get There
From Soekarno – Hatta International Airport (Jakarta City), a trip to Sumbawa Regency may take around 4-5 hours by airplane. The destination is Sultan Muhammad Kaharuddin III Airport, actually. Once arriving at Sumbawa Besar City, the next destination is Kemuning Village at Sekongkang Sub-District. The distance is 151 km, so this trip may take around 3 hours and 22 minutes. As for the best route, it must be Lintas Sumbawa Street.