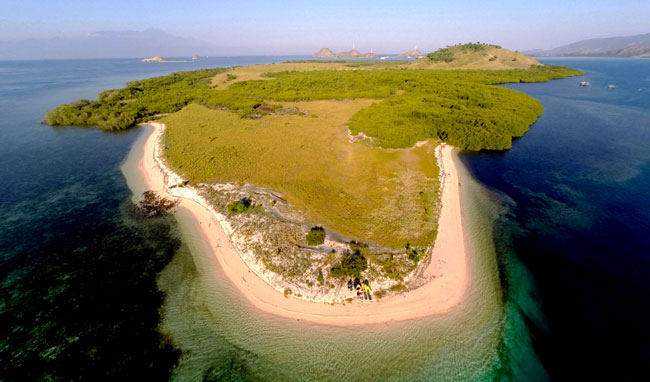 Sumbawa Regency becomes another famous vacation destination, especially for those who are visiting West Nusa Tenggara Province. One of the reasons is the presence of small islands that reside in the north part of the region. For instance, there is Namo Island! Another name is Range Island and it belongs to Poto Tano Sub-District. In terms of name, it derives from the Bajo Language. “Name” means mosquitos. As the name suggests, the island has lots of mosquitos due to the presence of lush mangroves on it. Despite the fact, the island offers lots of attractions to visitors including sea scenery, pearls cultivation site, and much more! It is even neighboring to a famous island called Kenawa, which tourists can visit later.

The Nuance
In terms of size, Namo Island has the total area of 191 hectares. The shoreline is quite long too, which is about 6.40 km. The nuance is considered serene due to the low number of people and visitors. As mentioned before, the island has lush mangroves (that cover almost 40% of it). It also features two beautiful hills where tourists can enjoy trekking and photography. What is next? If tourists reach the eastern part of the island, they may find a pearl cultivation center. Everyone should drop by later!

Exploring Namo Island
The first allure in Namo Island is the formation of stunning corals in the sea. This explains why most tourists would visit it for snorkeling and diving. For those who can’t swim, in this case, they can simply stand by the store and witness the corals from that spot. It is possible due to the crystal clear seawater, so the corals and fishes are visible from the land. As an alternative, tourists can rent a boat and watch the underwater scenery while riding the boat.

What is next? After exploring the shoreline and beautiful sea, tourists should conduct photography at the mangrove forest. One thing, it is better to come at noon or in the morning. The purpose is to avoid annoying mosquitos and other insects that occur in the afternoon. After exploring the mangroves, tourists should also go to other parts of Namo Island. For instance, they may find a lush dry savanna. The yellowish landscape looks both exotic and beautiful, without a doubt.

The next benefit to visiting Namo Island is the fact that it resides near to another famous island called Kenawa. That means tourists are able to conduct island hopping easily after exploring Namo. It only takes several minutes to cross to Kenawa Island by boat, after all. Do not forget to carry extra cash to pay the boat service, though.

How to Get There
From Jakarta City, the first destination is none other than Sumbawa Regency. For the fastest trip, tourists should take an airplane from Soekarno – Hatta International Airport to Sultan Muhammad Kaharuddin III Airport at Sumbawa Besar City. It takes only 4 hours and 5 minutes by a direct flight, in fact. After arriving at the downtown, the next destination is the local port. This time, tourists may ride a speedboat and head to Namo Island right away (which takes about 10 minutes only).