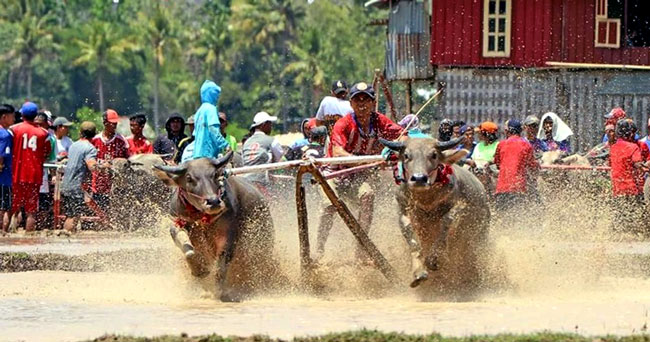 Sumbawa Regency is a rich region, especially when it comes to tourism. Commonly, Sumbawa is known for its beautiful nature. Aside from that, more people visit it in order to find entertainment and watch Indonesian local festivals. For instance, there is the famous Barapan Kebo. It is done during the planting season in several villages like Poto, Pamulung, Senampar, Moyo Hulu, and much more. In a nutshell, it is similar to Karapan Kerbau (buffalo race) and has become the locals’ pride for generations. No wonder, tourists are interested to witness it when visiting Sumbawa Regency.

The Nuance
The nuance is considered merry due to the intense competition among the participants. As for the location, the race is done in a wet local farm. There is the judge that resides on a small bamboo tower, as well. Still, the main allure is none other than a group of buffalos with their unique ornaments. Two buffalos are united using a custom wood where a jockey may ride it for racing. The rider doesn’t wear special attire, though. What about the audience. Well, they should watch the race from outside the farm. Fortunately, taking photos is allowed during the race.

Exploring Barapan Kebo Festival
Barapan Kebo is considered the same to Karapan Kerbau of Indonesia. The race takes place in a local farm of a village, so tourists must come at the right place. The best way to avoid disappointment is to hire a local guide, in that case. The service is able to give information regarding the schedule and place of the event, after all. Once arriving at the farm, later, tourists can even watch the preparation. The locals may irrigate the farm with some water first.

Next, the participants prepare their buffalo before racing. They may submit it later to the committees and wait for 3 days before the date of racing. The purpose is to conduct a measurement regarding the size and age. It is important to categorize those buffalos based on their class, after all. As for the duration of the festival, it depends on how many racers that join the event. For tourists, they are allowed to take photos while watching the race! What they must avoid is to cause disturbance during the procession.

The merry nuance becomes the best allure in Barapan Kebo Festival. Somehow, it entertains the audience including tourists. Aside from that, tourists can learn the history and further information about the event. According to the locals, the festival is done either before or after the harvesting season. It is also said the festival helps to unify villagers regardless of their profession.

How to Get There
If tourists want to watch the event, they need to get to Sumbawa Regency first. The best way to get there is by airplane, without a doubt. For instance, it takes about 4 hours and 5 minutes to reach Sultan Muhammad Kaharuddin III Airport (Sumbawa Regency) if tourists come from Soekarno – Hatta International Airport (Jakarta City). After arriving at the destination, tourists should find a local guide who can tell the exact location and schedule regarding Barapan Kebo Festival.