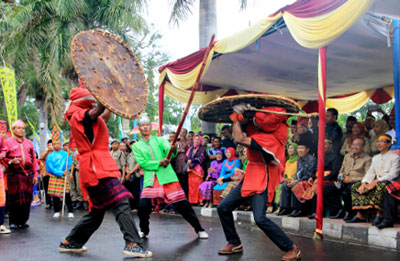 It is a known fact that Sumbawa Regency is surrounded by lots of natural attractions and beautiful landscapes. With these limitless vacation spots, tourists would have a good time when exploring the region, therefore. So, is that all? Fortunately, Sumbawa is also famous for its culture and arts typical of Indonesia. One of the most interesting performances for tourists to enjoy is called Karaci. This fighting show is done by local men either as an entertainment or to find out the best man in the village. As for tourists, this unique performance becomes a great feature for their vacation, without a doubt.

The Nuance
Karaci is done by two men and it is done in an open field. Sometimes, the performance even takes place on a hill! The participants wear "sarong" and traditional attire, as well. Not to mention they carry a cane or wooden stick on the right hand and a wooden shield of the left hand. Even though the fight looks fierce, the fighters won’t hurt each other. They only aim for the shield when hitting, after all. The nuance looks both entertaining and intense, though.

Exploring Karaci Performance
Some tourists perhaps overlook Karaci Performance due to the unfamiliarity. It is because they don’t know the meaning and have not witnessed it directly yet. It is true the fight looks real, but it may entertain the audience. Those who watch the fight can also learn the philosophical meaning behind the performance. For instance, it contains the local wisdom. The purpose is to train local boys to be a real man. Not to mention it teaches several values like sportsmanship, self-control, and discipline.

Aside from learning the values in Karaci Performance, tourists can definitely enjoy the aesthetic aspect of the fight. They can even learn the moves and take photos with the fighters either before or after the performance. For the information, a judge leads the fight and decides the winner at the end. Another important consideration is that tourists should not get too close to the arena while watching. Otherwise, they may disturb and fighters or getting hurt due to accidents.

Even though Karaci Performance sounds attractive and popular, the fact is otherwise. It is because the locals start to neglect this culture as the time goes by. With the help of tourists, fortunately, villagers become motivated to retain and promote it these days. Those who want to watch it directly, in this case, should visit Kakiang Village in Moyo Hilir Sub-District where villagers keep retaining the tradition for generations. Have no worries. It is easy to get there.

How to Get There
The first destination is Sumbawa Regency and it can be done the fastest by airplane. For instance, a flight from Soekarno – Hatta International Airport (Jakarta City) to Sultan Muhammad Kaharuddin III Airport (Sumbawa Besar City) takes approximately 4 hours and 5 minutes. Once they arrive at Sumbawa Regency, their next destination would be Kakiang Village at Moyo Hilir where the performance often occurs.