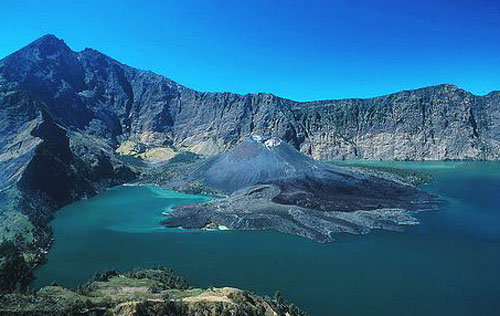 The Wallace Line, named after 19th century naturalist, Alfred Russell Wallace, marks a point of transition between the flora and fauna of Western and Eastern Indonesia and acts as the Western boundary of West Nusa Tenggara, which includes Lombok Island and Sumbawa. Lombok is noticeably different to its close neighbor, Bali. The northern part of the island is mountainous and lush with tall trees and shrubs. The South on the other hand is arid and covered by savannas. Large Asian mammals are absents and replaced instead by large numbers of marsupials, lizards, cockatoos and parrots. The difference becomes more pronounced as one moves further east where dry seasons are more prolonged and the land is dry and bush-like, and so in many areas corn and sago are the staple food, instead of rice. At first Islam time come to these islands in the 16th century, four Hindu Kingdoms co-existed in apparent peace what is now called West Nusa Tenggara and is still the religion embraced by those in the west of Lombok, which are primarily Balinese. Lombok experienced strong Balinese influences in the past, but has still retained a unique identifies. The indigenous people of Lombok, the Sasaks, are predominantly Moslem and have a strong, distinguished tradition, as do the people of neighboring Sumbawa. Soft white sand, virgin beaches are typical in Lombok, where the motto is 'You can see Bali in Lombok, but not Lombok in Bali'. Famous for its 'tenun ikat' hand-woven textiles, the island has exceptional charm and its relatively undiscovered, except for Senggigi City, which becoming a major resort area. Regulars shuttle flights from Bali and Surabaya as well as ferries provide excellent transportation links within the islands of the province as well as with the rest of the country.

The two largest islands in West Nusa Tenggara province are Lombok in the west and the larger Sumbawa Island in the east. Mataram, on Lombok, is the capital and largest city of the province. The province is administratively divided into six regencies and one municipality, Mataram. The Sasak ethnic group mainly inhabits Lombok, with a minority Balinese population then, Sumbawa and Bima ethnic groups inhabit Sumbawa. Each of these groups has a local language associated with it as well. The population of the province is 3.821.134; 71 percent of the population lives in Lombok.